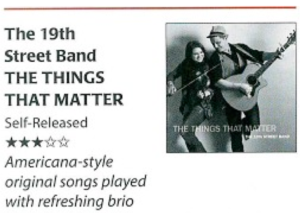 This Is a marvellously entertaining band who play throughout with great verve. Jump in The Water, a tale of a Wall Street financier who renounces the rat race for a more spiritually satisfying life of simple pleasures, is positively invigorating, for example, with appealingly conversational vocals from Caolaidhe while Its True What They Say is played with such energy that, ia a different arrangement, one could imagine the song being played by a punk rock band.

Meghan Davis is herself an attractive singer, as on Trouble, a song about putting on a brave face, having been dumped by her boyfriend in favour of one of her friends and then seeing the new happy couple in the street. The title track, sung by Caolaidhe and featuring sweetly romantic fiddle, has somewhat happier subject matter for it is a marriage proposal In song, no less. With only six tracks this is really a mini-album but all the songs are interesting and lyrically coherent, all the musicianship is accomplished and the band clearly have considerable potential