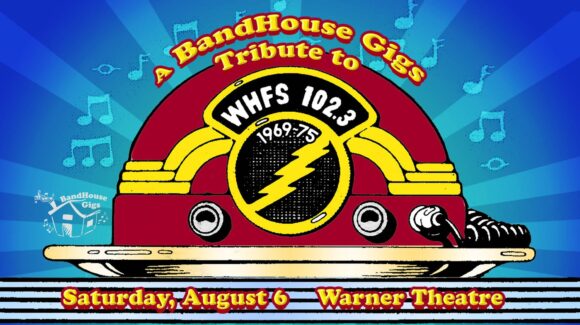 BandHouse Gigs presents a tribute to the legendary Bethesda, MD based FM radio station WHFS and the music promoted by them between 1969-75. Listeners were introduced to artists including: Little Feat, Bonnie Raitt, Jackson Browne, Tom Waits, Bob Marley, Tower of Power, Frank Zappa, John Prine, Stevie Wonder, Linda Ronstadt, Richard Thompson, Traffic, Jeff Beck, Neil Young, Bruce Springsteen, and NRBQ to name just a few. It was an explosive time for music and WHFS was the catalyst helping launch the careers of many of these iconic artists. Joining us on stage to recreate their broadcasts will be several WHFS DJs, including Weasel, Adele and others. BandHouse has assembled an all-star lineup of performers to pay tribute to the music of this era including: Kelly Bell, Jenny Langer, Jonathan Sloane Trio, The 19th Street Band, Jon Carroll, The Sidleys, Danger Bird (Tribute to Neil Young), The Texas Chainsaw Horns, The Half Smokes, Me & The Boys (Tribute to NRBQ), Holly Montgomery & more TBA. Come out and see WHFS DJs and hear some great music at the fabulous Warner Theatre in DC!